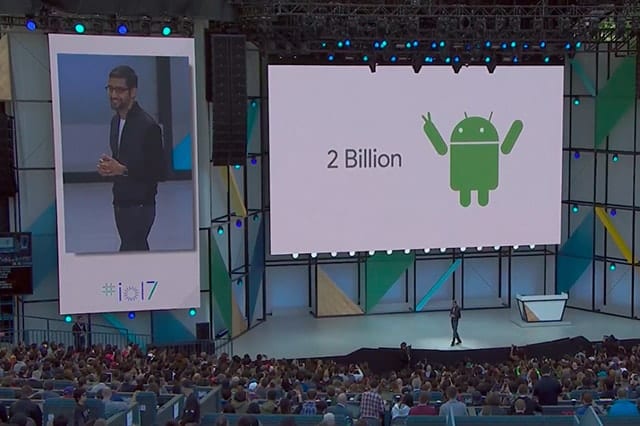 The search engine giant definitely has a lot in store for us in 2017 and beyond. Google’s announcements from last October were centered on hardware. In the Google I/O developer conference, the emphasis was mostly on software and how to get the most of Android devices.

So, what has Google got in store for us this year? We’ll do a rundown of what was announced at their annual event below.

AI Across All Android Devices

Point your Android phone’s camera at anything and Google Lens will try and figure out what you’re looking at. Features like this one are made possible by Google applying a layer of artificial intelligence (AI) to Android devices. And the tech giant’s plan is to integrate AI technology to all of its products.

Google announced that is has developed the second-generation tensor processing unit (TPU) chips for machine learning. The company’s claims this newer TPU can deliver up to 180 teraflops of performance.

Although you’re probably not going to use these chips directly, you’ll likely see better Android features and operating systems with such a technology at Google’s disposal.

The Assistant Comes to the iPhone

While long-time iPhone users won’t likely be turning their backs on Siri out of frustration anytime soon, Google just wants to let you know that Google Assistant is already available on the iPhone. Apple users can now get a chance to enjoy what the voice-activated assistant has to offer.

In a nutshell, you can pretty much do the exact same things on your Android and iOS device. The only problem is that you can’t set up Google Assistant as your default AI on the iPhone.

Imagine Google Home giving you an early morning notification about developing road congestions in the routes you take to get to work. This proactive feature will be among the new updates the Google Home will be getting.

Alongside proactive assistance, the Google Home supports more music services and is now (essentially) a Bluetooth speaker. Plus, you can launch a file, video, app, or whatever you want on the smart home hub and have it displayed on your Android phone or smart TV via Chromecast.

YouTube is adding 360 videos to their TV app. An intriguing idea, sure, but you’ll wonder whether the TV could offer the best viewing experience for 360-degree videos. But hey, it’s a concept Google is willing to invest its expertise on so we’ll see how it goes.

Google is giving every netizen free access to the company’s progress in the field of machine learning. Creating a center for all of Google’s AI efforts (e.g. tools, research, and applied AI), the search engine giant launched its initiative in the hopes of unlocking more capabilities of its artificial intelligence project.

On the site, you’ll see a couple of experiments that highlight Google’s progress in its machine learning initiative. Those include a game where an AI guesses your drawings, a tool that lets unskilled artists turn their ideas into actual illustrations, and an application that plays along with piano players.

Google by the Numbers

At the beginning of the conference, Google CEO, Sundar Pichai, shared a few meaningful statistics.

The Assistant is More Conversational

Google Assistant is getting new features and among the most important is this: it’s now more conversational. With 70% of Google Assistant requests made in natural language—not the typical keyword queries we use on search engines—the AI is starting to crack the complex science behind human conversations.

You may now type your query instead of saying it out loud to the Assistant, too. This will certainly come in handy when you prefer a bit of privacy when making your queries or requests.

The tech giant is expanding third-party actions on its AI. You may now trigger connected home devices and send money on all your Android devices. Not only that, Google Assistant is learning new languages soon.

It’s safe to say, Google Photos has been a runaway success for the Mountain View company—so much so that it’s planning to add new features. You can now print photo books with it. The service now uses facial recognition to suggest sharing an album, too.

It’s more secure, it boots faster, and has longer battery life—these are some of the optimizations the tech giant plans for future Android devices. Making this seeming pipe dream a step closer to becoming reality is the upcoming launch of the latest Android operating system.

While Google hasn’t revealed Android O’s final name, you can now try it out as beta. Features will include autofill with Google, picture-in-picture function, and notification dots. Overall, it’ll get a ton of optimizations, too.

Google is planning to strip down its mobile operating system. The reason? It wants Android running on crazy, cheap mobile phones in the future. Naming the upcoming operating system “Android Go”, Google is distributing the lightweight OS to developing countries. At least, that’s the plan.

We’re a bit surprised, though, that there has been little mention of Fuchsia during the Google I/O keynote.

Moving Away from Java

Among the interesting things Google has in store for developers is that it’ll be using Kotlin, a first-class programming language, for making Android apps. The more modern coding language, Android developers will have to unlearn Java down the line.

In case you haven’t heard, Tango is a positioning technology VPS that lets you localize yourself inside establishments, be it a mall, museum, or whatnot.  Not only that, this platform measures your surroundings with 3D tools and brings virtual objects into your immediate surroundings. This technology is made possible by a bunch of sensors and we’re excited to see where it’s going.

Steering people to the right information they need has been Google’s core mission. That’s probably their main motivation in launching a fact-checking feature on Google search.

One particular area where it thinks it could use some work: jobs. The Mountain View giant is launching a new project (Google for Jobs) where its search engine collects and organizes millions of job postings from all over the Web. This feature should make it easier for job seekers to zero in on job opportunities.

There is little doubt that Google is making significant improvements across all its known platforms. As Google I/O showed us, a better Android, a smarter voice assistant, and tons of other exciting developments, we’re pretty excited to see the direction the tech giant is headed.

Previous
iOS 11 is Coming! Here’s What to Expect with the Anticipated Update