Microsoft recently announced that pre-orders are now open for the Surface Duo, the company’s first foldable smartphone. The tech giant says the Surface Duo belongs in a “new category” of smartphones because it combines the functions of a phone, a tablet, and a computer in one device. Here’s everything you need to know about the Surface Duo, including the specs, price, release date, and more.

In an unusual turn of events, Microsoft actually partnered with Google to bring “the Microsoft you love and the Android you know” to the Surface Duo. That means you can use the Android apps you already have, as well as some Windows apps. In fact, Microsoft created an entirely new operating system for this phone, which is specifically designed to work with split-screen devices.

The Surface Duo even has a Taskbar at the bottom of the home screen – just like a real windows computer. This makes it easy to find and open your apps. The icons on the Taskbar will move to the other side of the screen when you open an app on one screen.

If you want to know how you can already make and receive phone calls from your computer using the Your Phone app, check out our step-by-step guide here.

What You Can Do With the Surface Duo’s Dual Screens

With the dual-screen Surface Duo, you will be able to open two apps open at the same time – one on each screen. Using an app on one screen, you can click a link, and it will automatically open the appropriate app on the other screen. This means you don’t have to switch back and forth between different apps and become disengaged.

If you find yourself opening the same two apps all the time, you can create your own “app group.” Opening an app group will automatically open both apps on their own screen at the same time.

Then, when you are using an app on one screen, you can quickly select text and drag it over to the other screen as a quick-and-easy alternative to copying and pasting.

You can also drag and drop apps from one screen to the other, or you can “span” any app to take up both screens at the same time. And, when you rotate the device, the apps on each screen will rotate automatically. That means if you have an app like the Outlook email client open on both screens, a full-size keyboard will automatically open on the bottom screen when you rotate the device.

Microsoft claims that the dual screens will make it easier for you to process information, which will save you time and change the way that you work.

“When you’re working with two screens side-by-side, connected, the brain turns on in a very different way. It lights up. It magnifies,” Microsoft’s chief product officer Panos Panay said in a press briefing.

Microsoft designed the Surface Duo with the smallest hinge it has ever created. This custom 360-degree hinge has tiny gears that were designed with “watch-like precision.” Microsoft says you can easily open and close the device, and it will still stop and stay at any angle you choose.

You can fold the Surface Duo into a triangle shape for watching YouTube videos or open it like a laptop for typing. You can also fold it all the way around for making and receiving phone calls or fold it on itself to protect the screen from being damaged.

Panay called the Surface Duo “one of the sexiest devices we’ve built,” and there’s a reason for that. According to Microsoft, the Surface Duo is the “world’s thinnest folding device.” At just 4.8 millimetres (or 0.19 inches) thick, the Surface Duo beats out the Huawei Mate X, which is 5.4 mm thick.

When the Surface Duo is open all the way, you’ll get a huge 8.1-inch screen with a maximum resolution of 2700×1800. When closed, you get a 5.6-inch screen, which is still slightly larger than the iPhone 8 Plus screen. The screen is also protected with Gorilla GLASS, which means it will be protected against most drops and scratches.

The Surface Duo has lots of other great specs, including an 11MP (megapixel) camera that can shoot 4K video at up to 60 frames per second. It also has a USB-C port, which should make it easy to charge. Microsoft says the dual batteries will last over 15 hours when watching videos or up to 27 hours of talking time.

The Surface Duo has a starting price of $1,399 for the 128GB model. Or you can upgrade to the 256GB edition for $1,499. You will also get the Surface Duo Bumper included, which is like a protective phone case, and a 1-year limited warranty.

You can also add Microsoft 365 and several discounted accessories when you pre-order the Surface Duo.

The Surface Duo has a release date of September 10, 2020, but you can pre-order it now by visiting the Microsoft Store here. The Surface Duo will work on several networks, including AT&T, T-Mobile, and Verizon, at least for now. 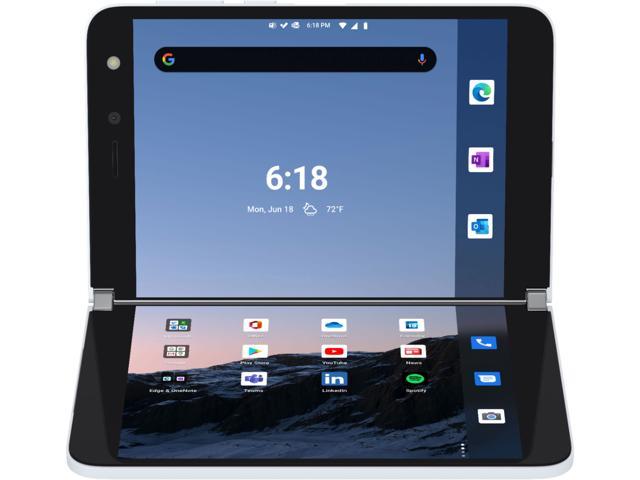 Next
What Is the Best Way to Set Up a Surround Sound System?