So, you recently made the switch from a Mac to a Windows 10 PC, and you can’t get used to the Windows Taskbar. Maybe you miss how clean the dock looked on your Mac, or you’re just looking for a better way to access your apps, files, and folders. Either way, there are lots of Windows apps that can mimic the look and feel of Mac’s dock. Here is our list of the best dock apps to make your Windows 10 PC feel a little more like a Mac. While this isn’t technically a dock app, WinLaunch is the best Windows app that gives you the look and feel of the Mac’s Launchpad.

This full-screen app is really simple to use. All you have to do to open it is hit the Shift + Tab keys on your keyboard or set up a hot corner. Then you can add apps, files, folders, and even shortcuts to websites you want to access quickly. It’s also easy to customize the name, placement, and icon of any shortcuts you add. Similarly, you can organize your files and apps into folders by dragging and dropping them on top of each other.

To delete an item, just click and hold an app for at least three seconds until the icons start to jiggle. Then you can click on the “X” that appears in the top-left corner. WinLaunch also supports dual monitors, so you can choose which display to open the app with. 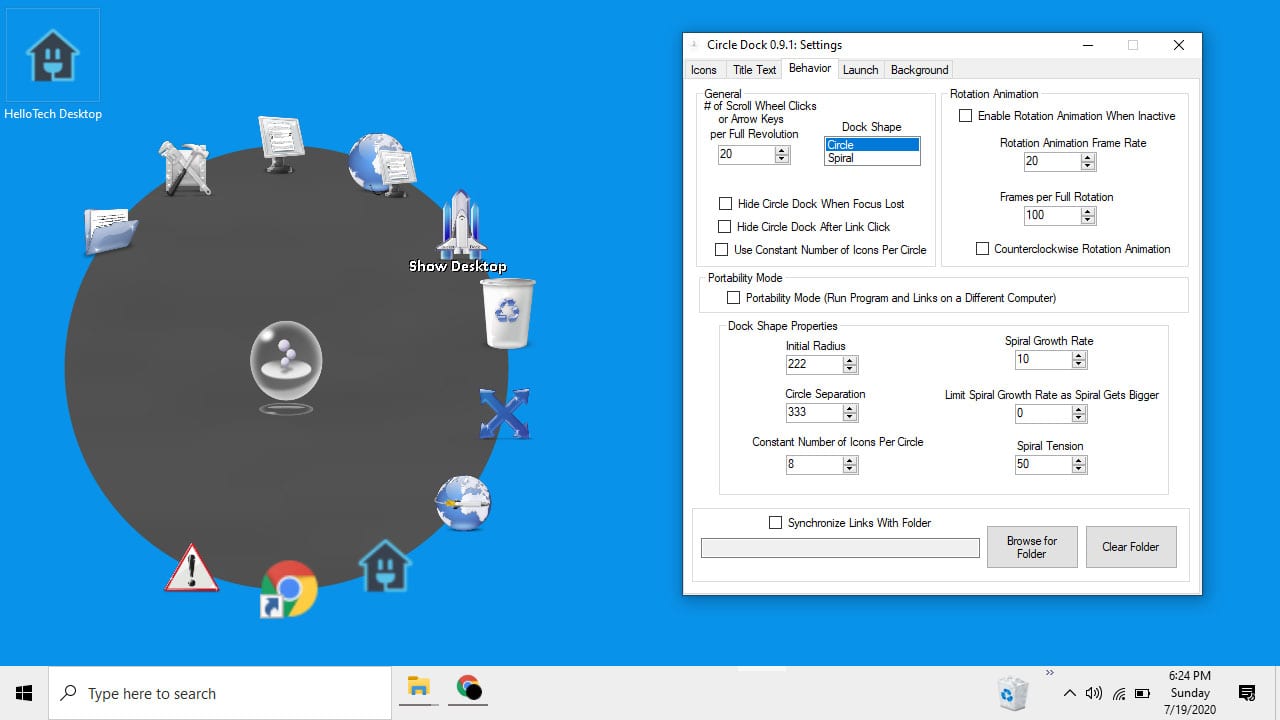 Circle Dock is one of the most unique dock apps for Windows 10 users. As its name suggests, you can arrange your frequently used apps, files, and folders on a circular dock. To open this app, hit the Windows + Ctrl keys on your keyboard or create your own custom hotkey for this function.

Like most dock apps, you can drag and drop items to this dock. However, adding and removing apps is somewhat difficult. Using the arrow keys on your keyboard or your mouse’s scroll wheel allows you to rotate through items. This will cause icons to spin on the dock, which is one of the best aspects of this dock app. In addition, you can customize the background and center buttons with any image you want. 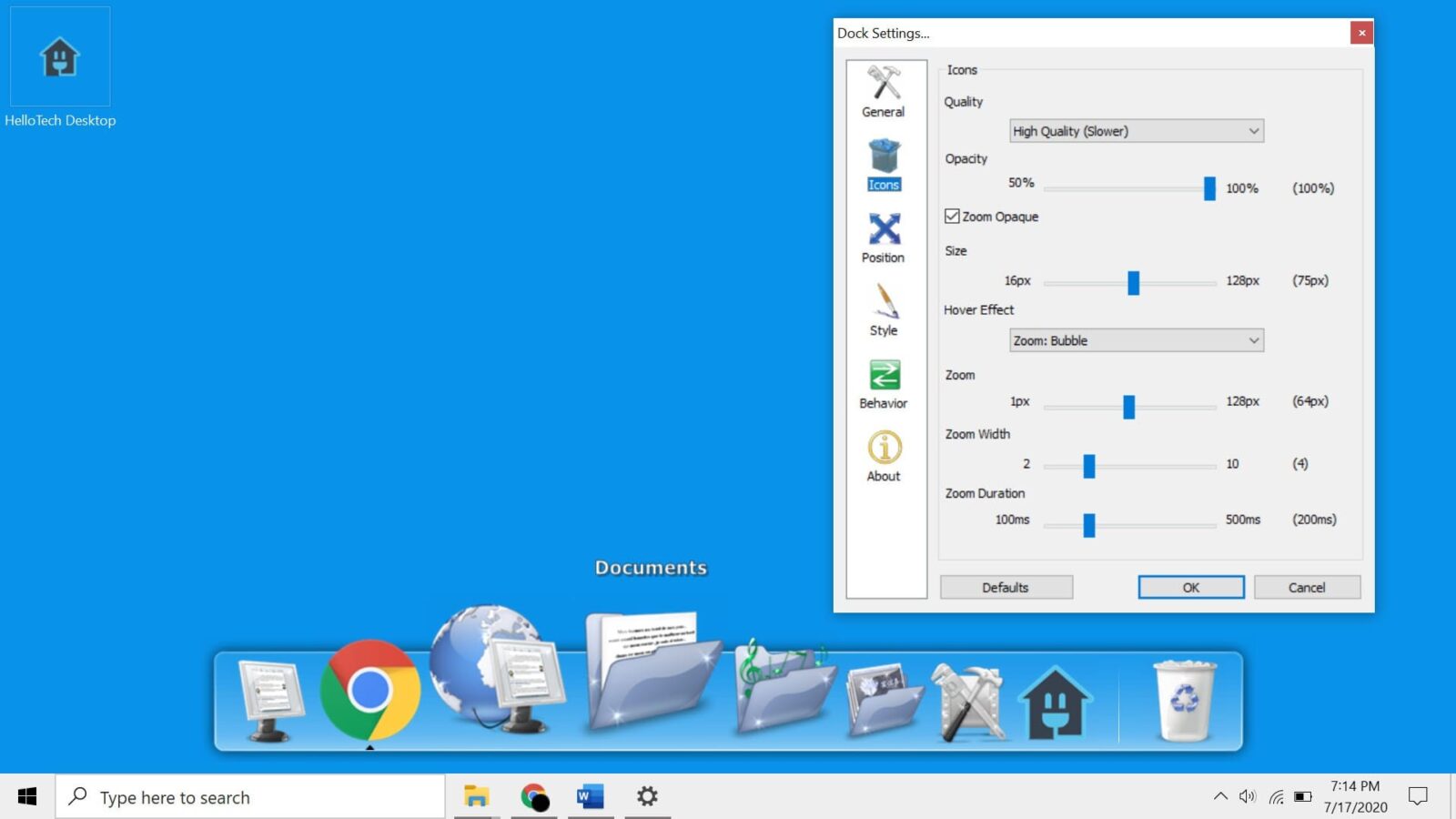 RocketDock was developed by Apple enthusiasts at Punk Software in 2005, and it still holds up today. This dock comes with shortcuts to several commonly-used folders on your system, as well as a fully-functioning Recycle Bin. You can even add your own folder shortcuts and personalize them with icons. There are also 30 themes that you let you customize the appearance of your dock.

However, adding apps to this dock can be difficult. You have to create a shortcut for an app and then drag it to the dock to add it. Also, it doesn’t work in tandem with the Windows Taskbar. So, if you open an app from your Start menu, it won’t show up in the dock.

While this dock app comes with an auto-hide feature, you do have to be careful when choosing where to place this dock on your screen. If your dock and Taskbar are both at the bottom of your screen, you can accidentally open apps from your Taskbar when you are trying to click on the dock. However, you can always move this dock up or hide your Taskbar. Unlike most dock apps, ObjectDock gives you access to a main dock, or what they call a Quicklaunch Dock, as well as a Tabbed Dock. The Quicklaunch Dock works just like the dock on your Mac, while the Tabbed Docks gives you another location to add shortcuts for your programs, documents, links, and other files and folders.

You can set the Quicklaunch Dock to show all your open applications, all your running windows, minimized windows, and even show system tray icons. You can also customize the position, size, style, color, and animation effects of the dock. For example, you can use a zoom effect like the Mac dock has, or you can make your icons glow when you hover your mouse over them.

Plus, when you hover over an app, you can see a preview of all the windows you have open for that app. You can’t get this feature on a Mac without downloading third-party software, such as HyperDock. There’s also a great feature called a Flyout menu, which lets you see all the subfolders of any folder on your dock. Both the Quicklaunch Dock and Tabbed Docks comes with a shortcut that opens the Windows Start Menu, so you won’t have to unhide your Taskbar to access any of your apps or features. However, unlike the previous apps on this list, ObjectDock is not free. You can sign up for a 30-day free trial to test the features or purchase the app for $4.99. NexusDock is by far the best dock app you can download to make your Windows 10 computer feel more like a Mac. This app combines the sleek, easy-to-use look of a Mac dock with the functionality you get with the Windows Taskbar.

Like the previous app, NexusDock shows you a preview of your windows when you hover over an app, and it has a shortcut for the Windows Start menu. But this app also comes with shortcuts for the Windows Search Bar, your System Tray, and more. This makes NexusDock a viable option if you’re looking to completely replace your Windows Taskbar with a dock.

In fact, NexusDock offers you more options than you would get with the Mac dock or Windows Taskbar put together. There are dozens of effects that you can choose for when you launch an app, mouse over a shortcut, or delete an item from the dock.

Plus, there are new shortcut icons you won’t find on a Mac or Windows computer. These include a fully-functioning recycle bin, a real-time weather icon, and a live CPU and RAM meter. These meter icons show you real-time graphs from your Task Manager, so you won’t have to open it to see these stats again.

In addition to the programs, files, and folders that you can add to your dock with this app, you can also add shortcuts for Internal Commands. These include shortcuts that let you show or hide your Windows Taskbar, minimize all your open windows, skip the audio track you’re listening to, and much more.

All these features are available in the free version of NexusDock. There’s also a paid version that lets you create unlimited docks, personalize system tray icons, and more. 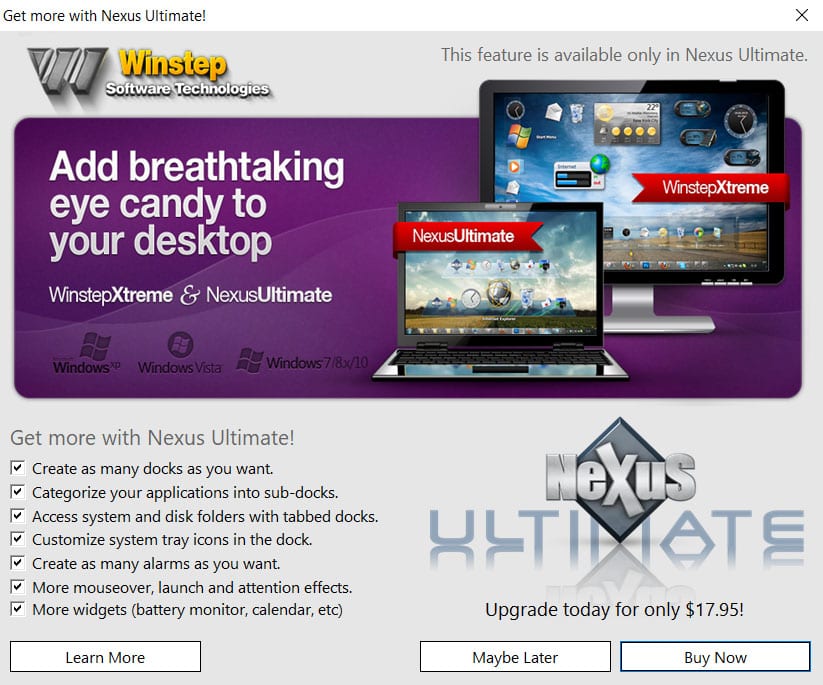 Now that you know the best dock app for Windows 10, check out our list of the best Windows 10 apps you can install on your computer. Next
How to Download, Install, and Use the iOS 14 Public Beta