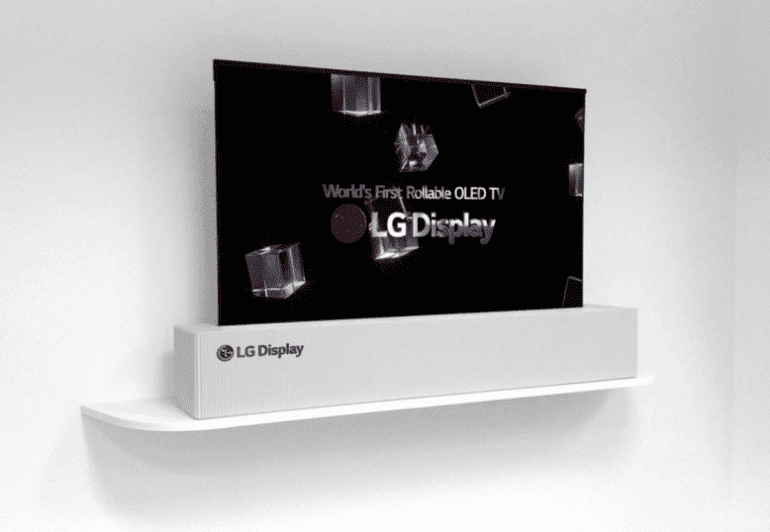 As noted from our top CES 2018 trends to watch for, the future of TV, the 5G revolution, and more were delivered in Las Vegas this week. With new smartphones, laptops, and other devices, there is plenty of new technology to look forward to.

The biggest TV maker in the world made the biggest TV. It’s a massive 146-inch television aptly called “The Wall”. The Wall consists of multiple modular MicroLED displays (technology similar to jumbotron scoreboards) that fit together seamlessly. The screens combine to form one, huge 8K television.

The LEDs that create the picture can be turned off or get extremely bright, creating the potential to compete with OLED picture quality. Mainstream sizes of the TV such as 75 inches are a couple years away.

Another Samsung TV from CES is the Q9S, an 85-inch 8K television that stands out. One interesting feature is with no 8K content available yet, the Q9S uses artificial intelligence to increase lower-resolution content to 8K.

LG debuted at CES 2018 the world’s first rollable OLED TV, as in that it can be rolled up like a piece of paper. The 65-inch TV has a 4K resolution. However, LG does not plan to actually release the paper-thin rollable TV this year.

The only smartphone to make this list doesn’t come from the big three providers, likely with the biggest mobile trade show looming next month. Released next month, the Sony Xperia XA2 Ultra is an upper mid-tier phone with a dual-lens camera on the front. The back includes a 23-megapixel camera with Sony’s Exmor RS sensor.

Among the many new laptops revealed at CES, the Samsung Notebook 9 Pen is one of the more appealing options. Made out of a new material called “Metal 12”, Samsung calls the magnesium alloy very light, yet unbelievably strong.

The laptop looks like a mix between a Samsung convertible laptop and Galaxy Note. Features aside from the stylus include an 8th-generation Intel Core i7 with 16GB of RAM and 512GB SSD.

The Introduction of 5G Connectivity

Another popular topic at CES was 5G mobile connectivity, which provides more bandwidth, faster speeds and lower latency for consumers and businesses. A panel of leaders from Verizon, Qualcomm and Baidu had three key takeaways of what’s to come with 5G.

5G is expected to exist alongside 4G for quite some time. The number of connected devices in the world passed the number of people back in 2014 so the 5G standard won’t be immediate.

Technologies like Gigabit LTE are helping bridge the gap between generations and push the 5G movement. Though official 5G standards were approved last month, carriers, cities and device manufacturers have much work to do.

Low Latency is the Key to 5G

Faster internet speeds are a nice benefit to 5G, but low latency is the true business value.

Qualcomm president Cristiano Amon said it may lead to cheaper smartphones. 1 ms is the latency standard for 5G connectivity. That may sound small but it’s a 30x improvement over 4G latency.

It can help make cloud computing more reliable, lowering onboard storage requirements and cut costs. More IT infrastructure can be transferred to the cloud and response time could be nearly the same as on-location.

The different between 5G and previous upgrades are the features of 5G for businesses. 2G, 3G, and 4G were consumer-focused upgrades. But 5G requires new technologies.

Carriers have to figure out how to deliver the service. The data will need to be carried by fiber optic cables with new applications. Amon believes the industry is moving to last-mile wireless solutions to bring 5G.

As these new devices and technology are released, keep HelloTech in mind as your on-demand tech support solution if you need help with setup or encounter issues.

Previous
Which Charges Your Phone Faster: Wireless or Wired?